I must confess, I Really Can’t Stand Some Christians!  Lol. ..Seriously though

Many of them are the most JUDGMENTAL, CYNICAL, ANGRY & MISERABLE people on the face of God’s earth.  If you don’t do things the way they see fit they attack you, typically by taking a single bible verse out of context and or misinterpreting it to align with their agenda.  And God forbid if you try to agree to disagree.. NO WAY, they get so heated and attack you on a verbal assault with a 100 out of context bible verses.  And I'm sure I'll get some hate on this post.  haha   Just like this dude.. These religious people call themselves Christians but it’s funny because the word Christian is NOT found in the Bible, not even the new testament canon.  It’s interpreted to mean “Follower of Christ” and yet these so called christians would be the last representations of the character and ways of Jesus.

These people are NOT FOLLOWERS.  Instead they use God as a selfish tool manipulating the faith to serve them instead of them serving the LORD.

They make the faith what they want want it to be so they can judge, condemn and control others and in turn feed their need to make themselves feel more important & significant. The use of God as their manipulation tool is an outrage.

They are missing the whole mark.  I Call em Fistians for “fake ass followers”.

Christ does not control people, he sets them free.  the Bible represents LIBERTY and has since the beginning when he gave us “free will” or the ability to CHOOSE everything from creation.  The Lord does not control through tyranny. HE INVITES THROUGH LOVE.   He WANTS you to CHOSE him and his invitation extends to everyone through the unfailing love and redemption of Christ. You need to be able to identify these Fistians.  Here’s how..  They make you feel like crap 💩, they judge & condemn regularly and they try and control. ..oh and they are usually very defensive if you disagree. ..Which is a reflection of their own insecurities.

When you’re in the presence of a real follower of Christ you’ll feel through them his presence of security, peace, hope, joy, comfort, inspiration & of course most importantly LOVE.  God is Love the Bible states!   Agape

I’m not here to judge you or condemn you, or even argue about different religions, faiths or ideologies. I respect other beliefs and all who are seeking. I am here to lift you up and give you hope. I used to have a little Fistian in me but i was set free 😁 and free indeed.

But I do roll deep with Jesus Christ and I'm all about my father's business.

I offer you not a Religion, but a ever growing spiritual RELATIONSHIP with God. .only he can reveal his truths to you connecting spirit and soul.

I’m Fired up Phil. A Minister, Truth Seeker & Ambassador of Jesus Christ. And I’ve been gifted to serve others as a Discerner, Faith Builder, Fighter & Leader.

I can't stand Fistians or Religion!  With that..

BeastLIFE Brand is FREEING CHRISTIANS by BREAKING CHAINS of Religion and Equipping Believers to LIVE POWERFUL & Represent through The LION’S TRIBE 🦁 of Kings & Queens.   www.facebook.com/groups/thelionstribe

Check me out and let's connect at...
BeastLIFE.com
Fired Up Phil
The Lion's Tribe 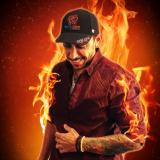